Since early 2010 global growth has been slowing. This period is known as a growth slowdown which typically occurs immediately following a rapid recovery out of a recession. The current cycle is shown on the chart below compared to the growth slowdown periods of the 1970’s and 1980’s. This slowdown in economic activity lasts approximately 2 1/2 to 3 years as the economy adjusts to a lower but more sustainable growth rate. This period is marked by great anxiety and concern about the long term prospects for economic growth. Both consumer and corporate spending is modest as a result. Monetary policy remains accommodating as monetary authorities try to counter balance the impact of slower growth. As confidence in the economic prospects improve corporate spending on employment and capital expands. Stock markets rally in anticipation of an improvement in economic activity. Consumer spending increases as consumers have greater confidence in the employment outlook. The end result is a re-acceleration in economic activity. We believe we are now at this inflection point which will have a pronounced impact on investment strategy over the next two years. 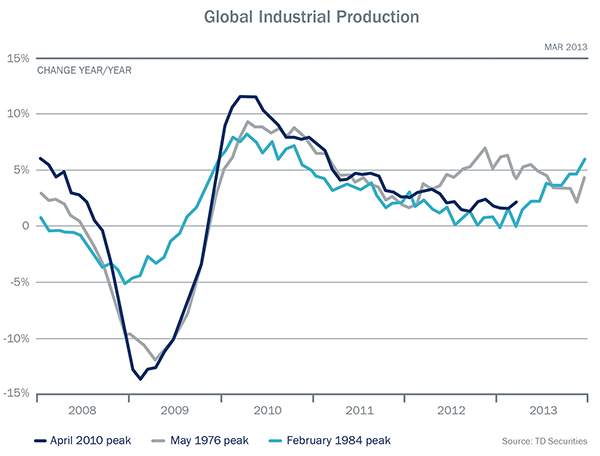 This change in wind direction for the economy will have a significant impact on investment returns for bonds. The recent backup in interest rates is only the beginning of a more sustainable rise in yields. A re-acceleration of growth in the economy will force monetary authorities to “normalize” interest rates. The chart below illustrates how interest rates have historically responded to accelerating economic growth. Since the recession and financial crisis of 2009 investors have allocated the great majority of their financial assets to fixed income securities. In the US for example bond mutual funds have taken in over $970 billion in the past four years versus a $325 billion outflow in US equity mutual funds. Since year end this trend has reversed and investors are now adding to equity funds at the expense of bonds. This shift in investment posture can be expected to accelerate as the global economy improves. 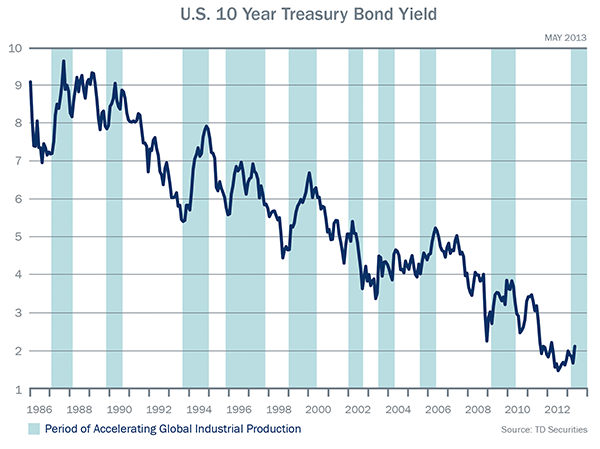 Improved global growth will have a positive impact on commodity demand and prices. The slow growth of the past few years caused a significant buildup of inventories in the commodity sector. In recent months however inventory levels in several commodities has declined as buyers have chosen to draw down inventories with the expectation of being able to replace their position at lower prices. As economic prospects improve we expect a new round of inventory rebuilding to occur. The chart below illustrates how commodity prices, particularly the metal sector experience strong pricing when global growth expands.

The single minded focus of investors on yield and safety of capital over the past few years drove significant amounts of capital into the defensive sectors of the stock market. At the same time investors consistently sold the more volatile sectors such as resource stocks. In our opinion investors are paying an excessive premium for safety and at the same time ignoring the extremely good value in the cyclical sectors. The chart below illustrates this point. With economic growth accelerating we expect investors will reduce their exposure to the expensive defensive sectors in favour of increasing their cyclical positions in a similar way in which they are now selling bonds to buy equities. 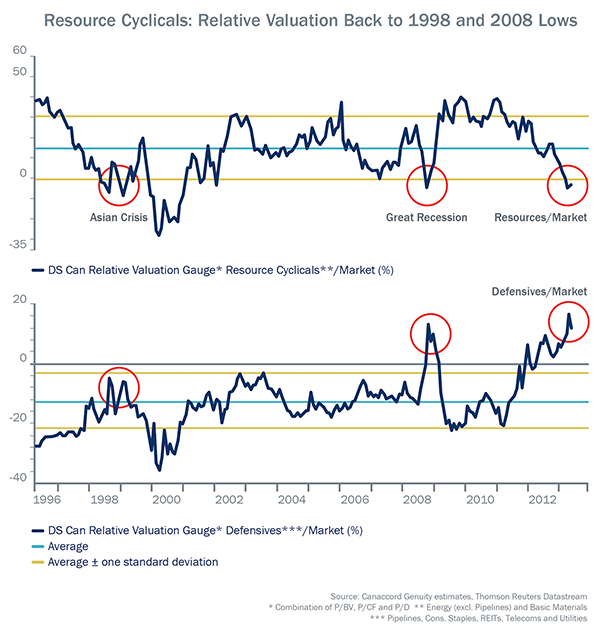 The resource sector has been under pressure for the past two years due to a combination of a slowing economy, weak commodity prices and investor aversion to volatility and capital risk. At this juncture the resource sector is poised to outperform as the economic winds shift in favour of sectors with cyclical earnings. Cyclical stocks will begin to look more attractive to investors due to their excellent valuations and improved growth prospects resulting from a re-acceleration in economic activity. The last time we had this combination of events was the recession lows of 2009 and the Asian Crisis lows of 1998. The chart below demonstrates how the resource sector performs strongly during periods of strengthening economic growth. The red circles note periods of good valuation as determined from the analysis above.

To summarize, the re-acceleration of global economic growth will cause a major shift in the investment environment over the next two years. Interest rates will rise as the current easing monetary policy converts to a policy of “normalizing” yields. Commodity prices will make gains in response to better growth. Investors will shift their focus from overvalued bonds and defensive stocks to sectors that benefit from renewed growth in the economy. Resource stocks will be a major beneficiary of this shift in wind direction.

The Marquest Market Comment is not intended to be relied upon as a forecast, research or investment advice, and is not a recommendation, offer or solicitation to buy or sell any securities or to adopt any investment strategy. The opinions expressed are as of June 2013 and may change as subsequent conditions vary. The information and opinions contained in this paper are derived from proprietary and non-proprietary sources deemed by the author to be reliable. The information is not necessarily all-inclusive and is not guaranteed as to accuracy. As such, no warranty of accuracy or reliability is given and no responsibility arising in any way for errors and omissions is accepted by Marquest, its officers, employees or agents. This paper may contain “forward-looking” information that is not purely historical in nature. Such information may include, among other things, projections and forecasts. We caution you not to place undue reliance on these statements as a number of important factors could cause actual events or results to differ materially from those expressed or implied in any forward-looking statement contained herein. All forward-looking statements are subject to change and are provided in good faith but without legal responsibility. © 2013 Marquest Asset Management Inc. All rights reserved.