GOLD AND GOLD STOCKS HAVE BOTTOMED

By marquest_admin
Posted Annually as of 2021
In Market Insights
0

The gold markets have been under pressure for over three years as investors have been liquidating positions of both the bullion and gold equities. There are several reasons we believe that the gold market is in the process of bottoming.

Gold bullion is highly correlated to inflation. The relatively slow economic growth exhibited during this economic recovery and its impact on wage growth has dampened inflationary forces in the economy. This period of weak inflation is we believe is coming to an end due in major part to the continuing improvement in the employment statistics. With unemployment continuing to decline, wage growth which is the main contributor to inflation can be expected to rise. The charts below which show the US CPI Diffusion Index and the US 10 Year Real Bond Yields compared to gold bullion illustrate that the weak inflation environment of the past three years is reversing. This will support an improving trend to the gold market. 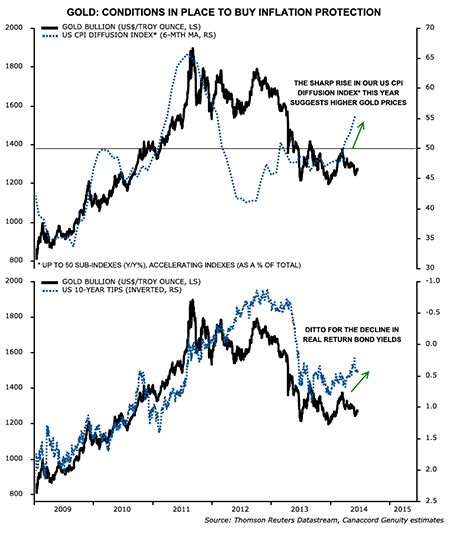 Mining is a capital intensive business and therefore capital expenditures have a strong influence on the prevailing trend to the industry. The explosive bull market in the mining sector between 2001 and 2011 attracted significant capital into the business. Typically, bull markets in gold stocks occur during periods of weak capital expenditures as companies benefit from tight industry conditions. During periods of strong CapEx the opposite is true. This is illustrated in the chart below which shows the substantial response in capital expenditures from 2010 to 2013. Note however that the weakness in the gold market over the past three years has now caused a decline in the growth of investment in the sector. This is bullish for gold stocks which have underperformed bullion substantially as show on the chart.

The weakness in the gold stock prices over the past three years in combination with the gold price holding above $1200 has improved valuation metrics of the industry to the extreme levels that prevailed at the bottom of the financial crisis in 2009. The chart below shows that gold stocks are trading at their book value. Any improvement in the outlook for the gold sector will likely witness a strong recovery in share prices. 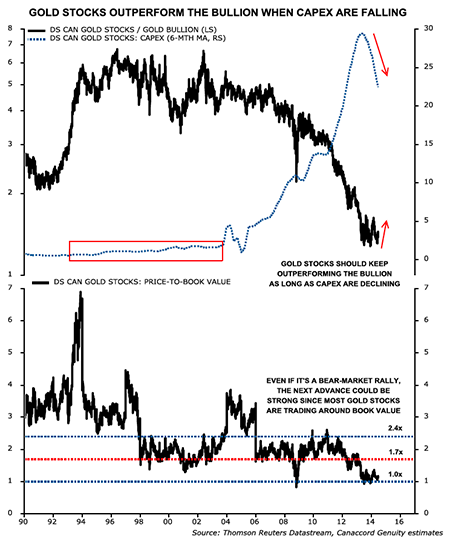 Gold bullion has been in a trading range between $1200 and $1400 over the past year testing the 1200 level in July and December 2013. The gold stocks have made a similar pattern. It now appears that both bullion and the gold stock are under accumulation as illustrated by the charts below. This bottoming process has been marked by negative market sentiment, attractive valuations and the completion of a liquidation cycle. Another factor is that the June/July period is typically the seasonal lows for the gold sector. These are all indicators that the gold sector is positioned to begin a period of outperformance.

The gold sector has in our view completed a classic market bottom. Macro- economic factors are turning in favour of the gold sector, industry conditions are improving, valuations are very compelling and the liquidation of the sector is complete. As conditions improve we expect to see investors reposition back into the sector.

The Marquest Market Comment is not intended to be relied upon as a forecast, research or investment advice, and is not a recommendation, offer or solicitation to buy or sell any securities or to adopt any investment strategy. The opinions expressed are as of June 2014 and may change as subsequent conditions vary. The information and opinions contained in this paper are derived from proprietary and non-proprietary sources deemed by the author to be reliable. The information is not necessarily all-inclusive and is not guaranteed as to accuracy. As such, no warranty of accuracy or reliability is given and no responsibility arising in any way for errors and omissions is accepted by Marquest, its officers, employees or agents. This paper may contain “forward-looking” information that is not purely historical in nature. Such information may include, among other things, projections and forecasts. We caution you not to place undue reliance on these statements as a number of important factors could cause actual events or results to differ materially from those expressed or implied in any forward-looking statement contained herein. All forward-looking statements are subject to change and are provided in good faith but without legal responsibility. © 2014 Marquest Asset Management Inc. All rights reserved.