By Mauricio
Posted Annually as of 2021
In Market Insights
0

As we highlighted in our last Resource Insight the valuations in the mining sector are extremely cheap and are at levels from which a recovery in the sector has been launched in the past. Resource sector valuation measures, while an important precondition to a recovery, do not ensure improved stock market performance. A change in the perception of the fundamental prospects for the resource sector is a necessary component for an improvement in stock prices. We believe we are at the threshold of a change in the economic backdrop which will improve the outlook for the cycle sectors of the economy. Commodity prices and resource stocks have declined substantially over the past four years particularly in the last few months. Some investors think that this weakness in the commodity sector is forecasting a recession in the near future. We disagree. If fact we believe the global economy will reaccelerate in 2016. The decline in commodity prices, particularly oil is providing a massive tax cut for consumers which will act to stimulate economic growth. In addition, over the past year major economies outside the US have been aggressively easing monetary policy which together with the devaluation of their currencies against the US dollar will act to reaccelerate global economic growth in 2016. The US economy has finally reached full employment and monetary policy has moved to normalize interest rates. The consumer sector which represents 70% of the US economy is in good shape benefiting from strong employment growth, improvement in real wage gains and the weak oil price. The strong US dollar and the tightening of monetary policy will, however, act as a headwind to the US economy and therefore limit the potential reacceleration of growth. We therefore expect the best rebound in global growth will be outside the US where the economies have greater economic slack and more stimulative monetary policies. The reacceleration in global economic growth will signal the beginning of the late stages of the economic cycle during which interest rates rise as monetary policy normalizes, commodity prices rally as capital spending expands and cyclical sectors outperform as investors recognize the improved prospects for revenues and cash flow. During transitions to the late stage of the economic cycle the equity markets typically have a major correction or a series of corrections as leadership in the market changes guard. This process can take several months as the old leadership stocks tire and the new leadership takes time to fully establish their leadership. During the corrections in August last year and this January there has been a marked increase in volatility due to a narrowing of market breadth as fewer and fewer of the leading sectors continue to outperform. These market conditions are, in our view, signaling that we have begun the rotation process. Equity markets are presently extremely oversold and a rally from these levels should not be surprising.

There are three periods in the past which have a similar late stage economic and market transition environments as today, 1977, 1986 and 1989. As illustrated in the chart below, in each of these periods commodity prices bottomed following an extended period of decline, interest rates began to rise as monetary policy was tightened and the S&P TSX began to outperform versus other equity markets as investors focused on the cyclical sectors. This late stage investment environment lasted approximately three years before it was completed with a cycle ending economic recession. During this transition period, it would not be unexpected to witness some financial difficulties as occurred in 1987 (LOB crisis) or 1998 (Asia/Long Term Capital crisis). Today the likely candidates to have financial difficulty are over leveraged resource stocks and or foreign US denominated debt holders. As in 1987 and 1989 we do not expect a financial crisis will be broad enough to derail the economy. Two additional factors which we believe increases the probability that this late cycle strategy will occur is investor sentiment and positioning. Due to the poor performance of the resource sector market sentiment is extremely negative and as a result the sector is under-owned, oversold and under-valued. Should the economic winds improve even modestly in favour of the resource sector the potential investor interest could move the stocks significantly given the current valuation levels. On the other hand, the most popular investment strategy over this economic cycle has been to buy US dollar bases financial assets. Until recently investor sentiment was extremely bullish and in our view the leading sectors in the US equity market are over-owned, over-bought and over-valued. Should our scenario unfold as we expect the US dollar will likely decline, especially against resource based currencies such as Canada. As a result, investors will likely shift their exposure into the cyclical sectors of the equity market where there is better value and improving fundamentals. We would then expect the S&P TSX to outperform the S&P 500 with perhaps the added benefit of a stronger Canadian dollar. 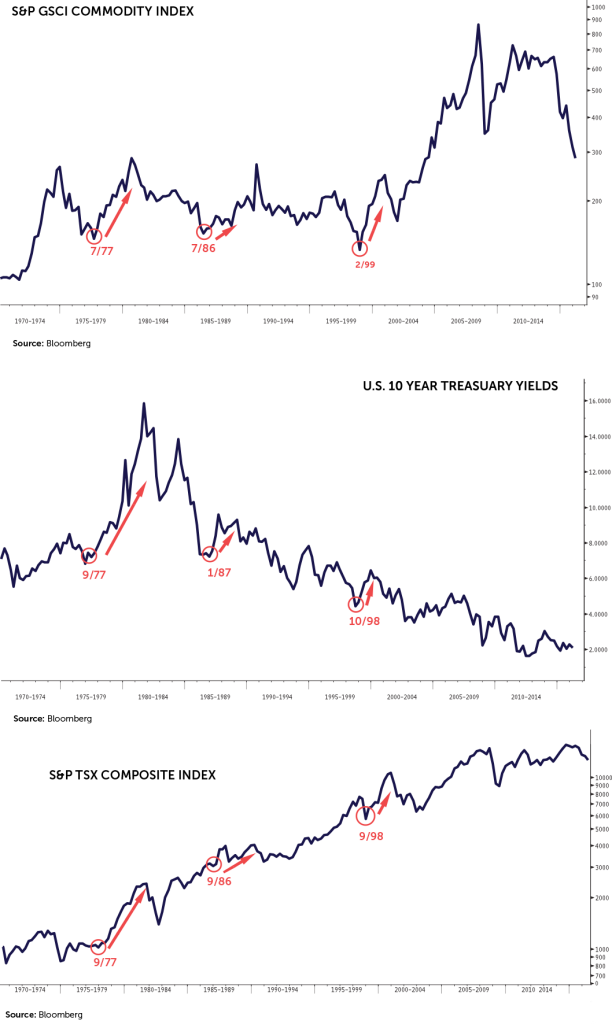