By Mauricio
Posted Annually as of 2021
In Market Insights
0

Given recent market volatility, depressed equity prices, and looming recession fears, investors have many concerns on their minds regarding where markets go from here. Due to these worries, investors have run to the exits in many markets, especially higher beta metals & mining stocks. For example, the Canadian S&P/TSX Venture Composite Index, which is composed mainly of junior commodity and energy companies, is down over 30% year-to-date. Why? Beginning in May, equity markets became concerned about 40-year high inflation levels, and recent prints saw the US CPI Index rise to 9.1% year-over-year, while in Canada, our consumer price index rose to 8.1% for the same time period (ending June). High levels of inflation have left investors wondering how central banks will be able to slow down the rate of inflation and what aggressive measures they will have to take to get it under control. Thus, as investors saw the probability increase that central banks may drive the global economy towards a recession, markets sold off.

Fundamentally, we believe that we are in a classic mid-cycle market correction, exacerbated by atypical inflation levels and geopolitical risks such as the war between Russia and the Ukraine, and that the economy is not headed towards a deep recession. Besides the fact that employment levels in both Canada and the U.S. have remained strong, corporate balance sheets healthy, and personal savings levels high, there are convincing reasons to believe equity markets are turning a corner. Let’s examine a few of them.

Not headed towards a deep recession

For one, economic momentum is improving. During the second quarter of this year, economic reports turned significantly weaker, ultimately resulting in a negative GDP reading. This loss of economic momentum, all while the Fed was becoming increasingly aggressive, severely heightened recession fears. However, as illustrated below, the economy has gained some strength. The Citi
U.S. Economic Surprise Index, which shows a positive reading when actual economic data comes in better than economic surveys, has risen from mid- June lows of -78 to now -22. So, while back in May/June recession worries were rampant, better economic reports as of late have calmed concerns that a recession is imminent.

Another piece of evidence that we are not headed towards a deep recession is that the bond market’s one-year forward inflation expectations (i.e. the one-year breakeven rate) has collapsed in recent months. In August, this rate dropped by approximately 1.2% to 2.8% and was as high as nearly 6.5% in late March of this year. What does this all mean? It means that the one-year forward
inflation rate is already close to the Fed’s target of 2% and that all the tightening the central bank has been doing may be starting to work its way through the economy to bring inflation back under control. We could reach the Fed’s target by the next meeting in late September. 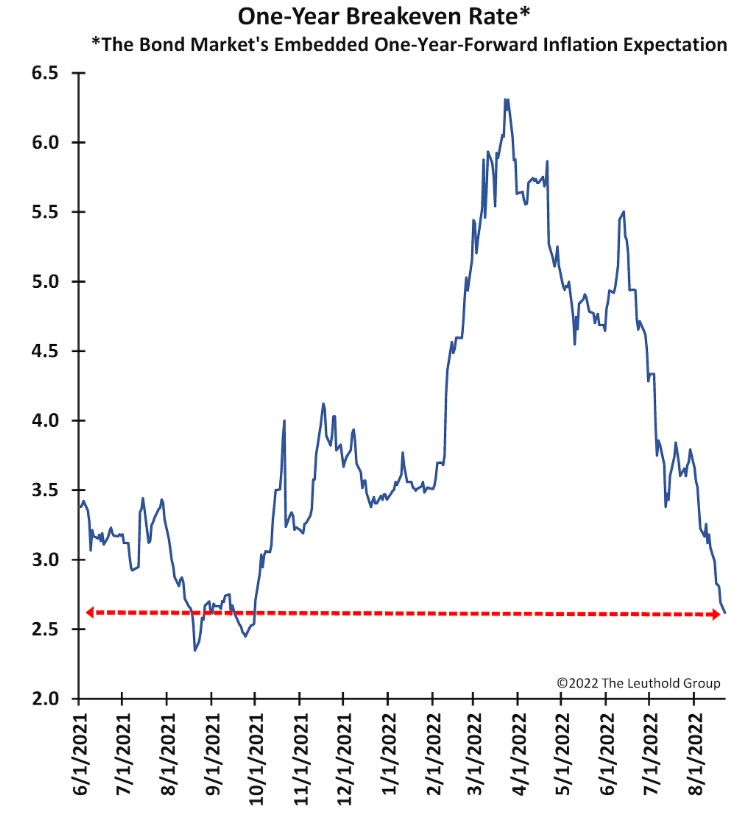 While the Fed is as hawkish as ever, bond yields themselves have been trending mostly sideways at around 3% during the last four months. Thus, the bond market stopped tightening despite several high inflation numbers as of late. 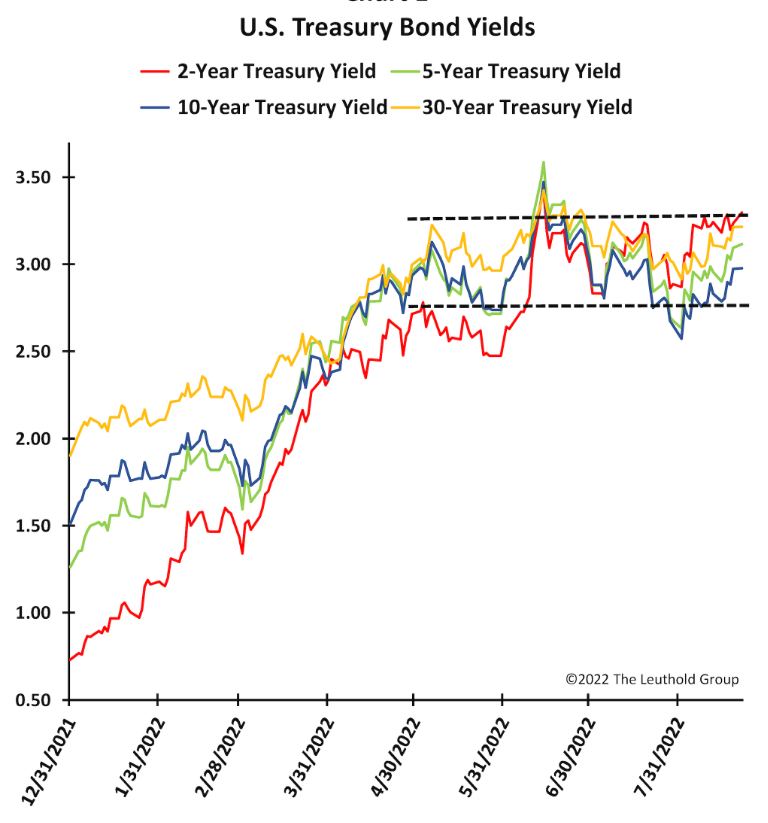 Lastly, we look at the corporate earnings picture. Throughout the spring of 2022, S&P 500 consensus EPS estimates had been coming down as analysts and companies themselves feared the looming recession. However, while it has only been a short timeframe, S&P 500 consensus EPS estimates stopped falling this month. This would seem to indicate an improvement in economic
momentum and diminishing fears that a recession is imminent. 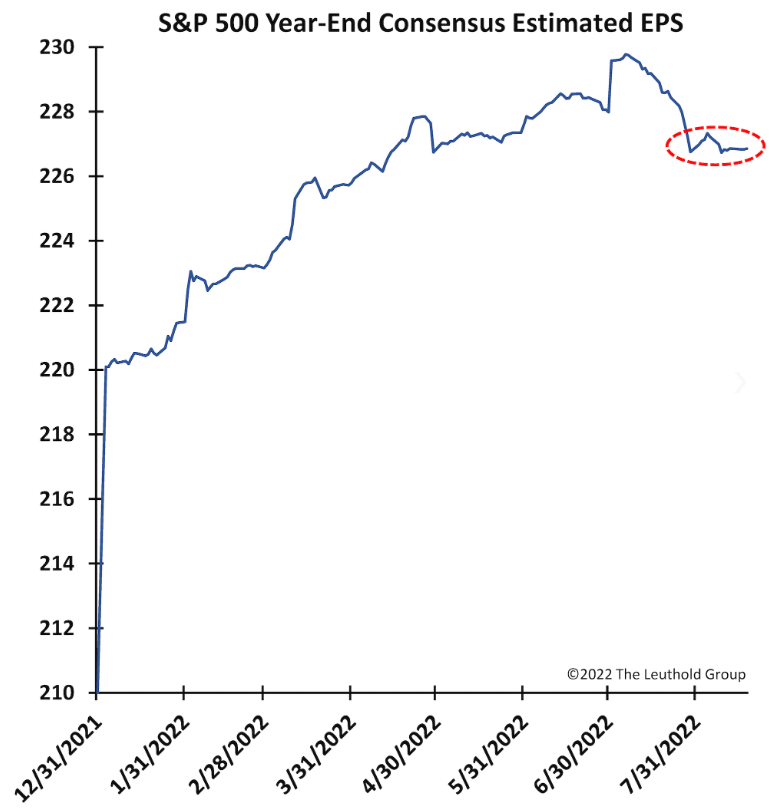 Global inventory levels of most metals remain extremely low due to an underinvestment by the mining sector over the past number of years. This was the case at the start of 2022 and remains the case today. Thus the tight supply/demand conditions we witnessed at the beginning of this year still remain very much a feature of commodity markets. And, given metal commodities have a long lead time to ramp up additional production, further supply imbalances are to be expected. The sector still needs to find new sources of supply to meet rising future demand, and this will mean further investments in exploration and development activities. As a result of this short supply, metal commodity prices should continue to remain firm. We again update the copper supply picture and as can be seen in the chart below, the supply of copper globally continues to drop. And the trends for zinc, nickel, and lead look very similar. 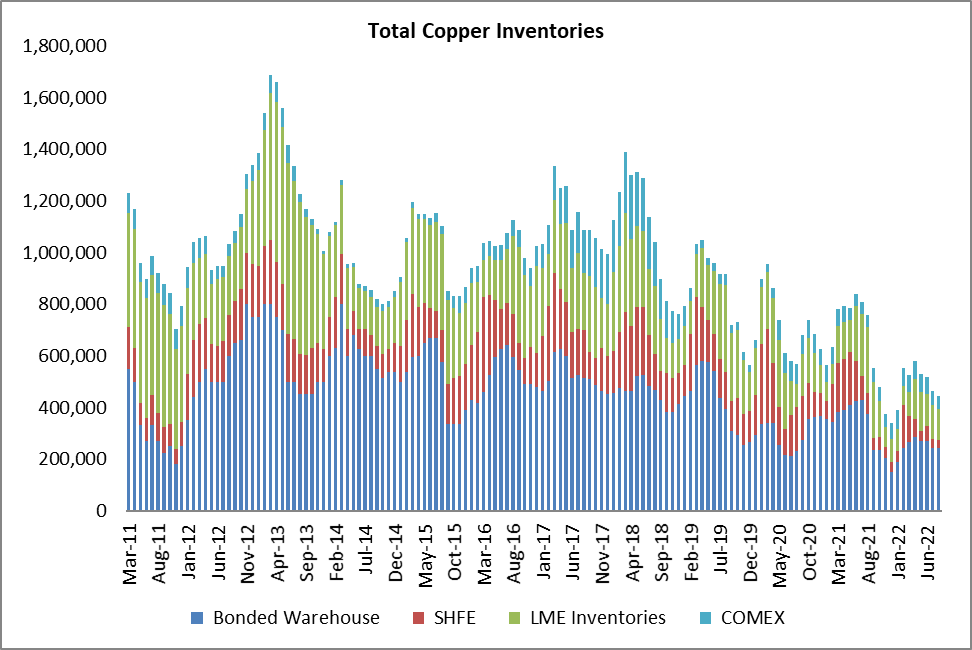 Which leads us to demand. As we mentioned, we believe that we are in a mid-cycle correction and that once inflation abates, economic activity will again begin to accelerate. As the world moves towards green energy targets, we only see the demand for metals and specifically, critical minerals, accelerating. Using copper again as a proxy, copper demand should grow for the next several years and especially for China, as the chart below so perfectly demonstrates. 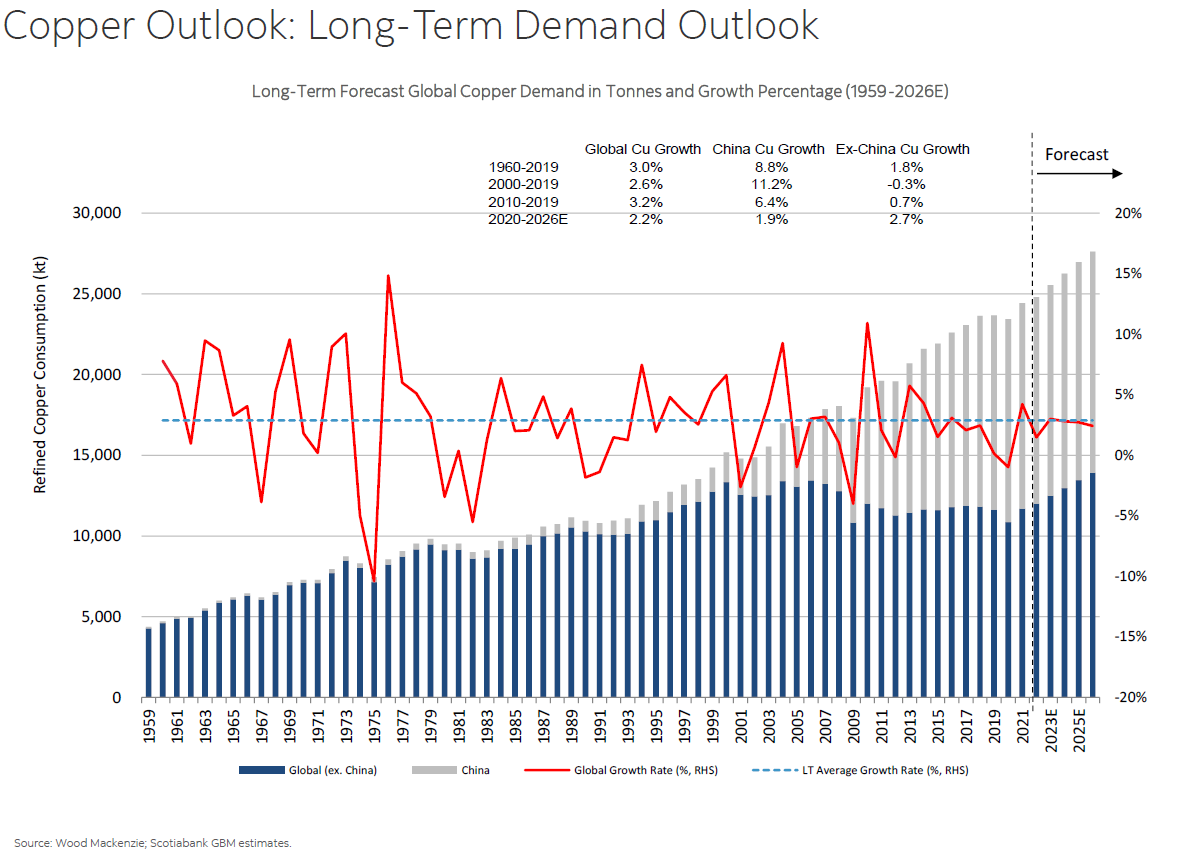 As we have pointed out in previous editions of “Resource Insight”, the mining sector also remains extremely undervalued. As can be seen in the chart below, enterprise value per turn of EBITDA (EV/EBITDA) for base metal producers is currently at its lowest level in over ten years, while the price of copper remains elevated. We believe that this dislocation will be rectified by a realignment
of metal commodity producers equity prices.

In summary, there are economic signals that inflation is abating and central banks around the globe are finally beginning to make a dent in the inflation problem. Once the market and investors get more comfortable with the fact that the inflation picture is improving, we believe we are poised for further growth in the back half of this economic cycle.

And, given that the fundamental backdrop in the commodities space and metals & mining sector remains very positive, the sector is very well positioned to capitalize on future economic and market growth.